Presented by The Institute of Critical Zoologists

Robert Zhao Renhui’s debut museum exhibition in the United States features two bodies of work that highlight the ubiquitous presence of flies and butterflies in our environment. Inspired by scientific methods of categorizing fly types, Zhao Renhui appropriates scientific tools to explore the boundaries, systems, and methods humans use to control fly populations, stemming from a dismissive attitude that belies their necessity. While the fly is seen as a nuisance, the Monarch Butterfly, on the other hand, is seen as a beautiful creature; it is a symbol of transformation.


In Effects, suspended fly traps and lures reflect Zhao Renhui’s fascination with the countless devices and methodologies invented by humans to exterminate insects. His investigation of fly extermination methods continues with one hundred different fly pheromones applied to photographic panels in a warm yellow hue that references the color of commercially produced flytraps. In He Counts The Stars And Calls Them All By Name, a large photographic lexicon documenting 4,784 specimens from a single family of flies (the Hover fly), Zhao Renhui draws the viewer’s attention to their ubiquitous presence in our ecosystem despite their near invisibility in human consciousness.


Zhao Renhui’s work exposes the overlooked contradictions, assumptions, and tensions inherent in our relationship with nature. Rendering the unseen visible, and the ignored critical, this multidisciplinary exhibition amplifies the intersections of insect and human, and natural and urbanized environments.

Up to 200 pheromones are available for farmers to lure, trap and detect pests that might potentially destroy their crops. In these 100 yellow panels, 100 different insect pheromones have been applied to the surface of the photographs. Insect traps are yellow because insects are drawn to this citrusy colour. It is believed yellow is a fly's favourite colour.

Insects collected from the curator’s car, John Silvis, after a night drive at Newport Beach, LA. 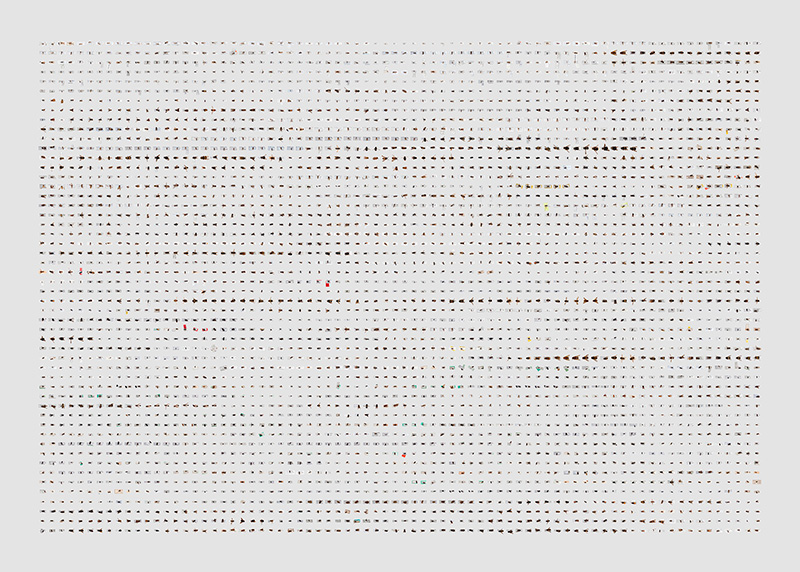 He counts the stars and call them all by name

A family portrait photograph of 4784 flies from a single family of flies. Each fly is meticulously labelled with information of its provenance and some of these flies mimics/pretends to be other insects like bees and wasps to cheat predators.


Although these butterflies and moths looks almost the same with their bright orange wings, they are treated and viewed very differently because of the situations they find themselves in.


The Lange’s Metalmark is an endangered butterfly that is endemic to California. The butterfly is only found in the Antioch Dunes National Wildlife Refuge. In 2013, only 78 individuals were counted by volunteers. The count involves volunteers walking in a straight line, adjacent to one another, and using a stick to flush the butterflies out of the weeds. In Antioch, more than two dozen species of plants and animals existed nowhere else in the world except in the sand dunes, federal biologists said. They began to disappear in the 19th century as development encroached from the south and workers began hauling away sand to manufacture bricks.

Only three species remain in the Dunes, - the Lange's metalmark, the Antioch dunes evening primrose and the Antioch wallflower - and all are on the federal endangered species list. The colorful Lange's metalmark has only 10 days of life to mate and lay eggs as it dodges an army of lip-smacking predators. In 1980, the Antioch dunes became a national wildlife refuge, the first in the United States specifically designated for the protection of an insect. Since then, the Lange's metalmark population has fluctuated but generally headed upward, from 154 in 1986 to 2,342 in 2000. The numbers plummeted for several years after that, and nobody is sure why. One problem is that once abundant native buckwheat, the metalmark caterpillar's favorite food, is being choked out by weeds. also appear to be at work. Biologists and volunteers spends many hours every week pulling weeds and counting the butterflies.


Monarchs arrive in California each winter. There, migrating western monarch butterflies nestle among the state’s coastal forests, traveling from as far away as Idaho and Utah only to return home in the spring. In 2019, there is an 86% drop in the number of migrating butterflies.  In 2017, scientists estimated that the monarch butterfly population in western North America had a 72 percent chance of becoming near extinct in 20 years. Monarchs require milkweed, a herbaceous plant that grows throughout the United States and Mexico, for breeding and migration. Acreage of milkweed, though, has been declining in recent years because of pesticide use and urban development.


Every monsoon season on Christmas Island, thousands of Swell Moths crowd around the Berrya cordifolia tree. It is a spectacle that lasts only for a day or two. Little is known about this spectacle. Christmas Island is also home to other more charismatic species so little attention is paid to these moths. Every monsoon season, millions of red crabs swarm to the beach of the island, covering the island in a great red splash. These Swell Moths feed exclusively on the tree Berrya cordifolia. The tree and the moth are found only in Sri Lanka, India and Christmas Island. It is hard to say if the tree and the moths are native or introduced to Christmas Island.

To see more of the series Effect, click here.